was first constructed in the late 1890s by Charlotte and Herbert Baker on their farm on Queen’s Line, just north of West Lorne . In the early part of that decade, the Bakers moved west to the Dakotas but returned within a few years to their farm in Aldborough Township (West Elgin). Upon their return, they built an octagonal barn for their Holstein dairy herd, most likely because polygonal (many-sided) barns were very popular in the mid-west in the mid to late 1800s.

The Baker’s added a large rectangular addition to the barn in 1905. The Savic family came to the farm in the 1950’s and eventually removed the addition, leaving only the original octagon barn standing. In 2003, Branika Savic was looking for someone to save the barn. It was in poor repair and she feared that it might not stand another winter. In May, the barn’s plight was featured in the London Free Press. Susanne Spence Wilkins, read the story and raced over to the farm to see the barn.

Susanne had admired the barn from afar since she was a child and was thrilled to see inside. Branika agreed that this was a good match and gave the barn to Susanne, hoping that it would be rebuilt in the future. After weeks of dismantling, the main barn structure was stored in a transport trailer until January 2011 when repair of the main timbers began.

The former general store location in Palmyra provided a good home for the barn. Construction at this site began in October 2011 and continued until April 2013. The barn is now a four-season building, fully insulated with geo-thermal heating.
One of Susanne’s goals was to share the building with many people. This led to the establishment of a small café, many garden and food related seminars and display gardens on site. There is a unique mixture of home and garden curiosities for sale, including furniture made from reclaimed wood, local preserves, honey and cider.

When you come to the Crazy Eight Barn, you will first see our barn quilt which is the “Dakota Star” pattern in honour of the Baker’s inspirational trip west. Inside you will be overwhelmed with the essence of the original barn and the combination of the new uniquely crafted curved staircase, rough cut hardwood floor and café counters created from old farmhouse doors. Our washrooms will surprise you with hand poured concrete sinks and vanities build from remnant barn beams.

The hope is that the barn looks like a farmer built it and loved it. 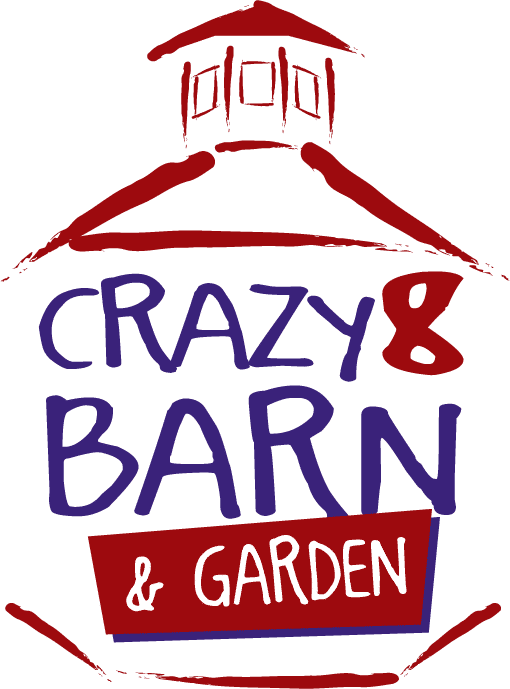 Please check regularly as hours may change without notice.